IF YOU WANT TO KNOW IF YOUR STRATEGY IS WORKING

One of the most difficult problems faced by any strategist, in warfare or in business, is how to know whether the strategy that has been implemented is working or not. This is critical because if it is not working in helping you to reach your objectives, you need to change it, and the sooner the better. Yet, recognizing whether our strategy is working or not is complicated by a number of factors that can easily deceive us into thinking that a strategy that is working is not, and cause us to abandon it prematurely.

Factors That May Lead Us to Err

There are many factors that may mislead us and can easily cause us to err in our analysis. These include:

In World War II, the decision was made soon after the U.S. entry to allocate the preponderance of available resources to defeating the Germans, and to hold on with minimum men and material against the Japanese. This was a key element of the U.S. grand strategy for the war. Japanese forces were soon victorious over all American forces in the Pacific area. They captured Guam and Saipan and other American-owned islands. Macarthur’s beleaguered command in the Philippines was not reinforced and retreated to Bataan and the fortress of Corregidor. They were eventually forced to surrender to the Japanese. Moreover, when American forces finally did meet German troops at the Kasserine Pass in central Tunisia, American forces were badly defeated, despite the fact that these forces had received the lion’s share of what the U.S. had available at the time.

Until the situation turned around some time later, many questioned U.S. grand strategy. A few even suggested that America withdraw from the war and negotiate a separate peace with the Axis powers. In fact, this was exactly what the Japanese had in mind with their initial assault against Pearl Harbor and other American targets. They knew that they didn’t have the economic power to defeat the U.S., but thought in the initial stages an empire could be conquered and then retained through a negotiated peace. Fortunately, President Roosevelt and the U.S. Combined Chiefs of Staff stayed the course. It was the correct strategy, and it eventually led to complete victory four years later.

It is very rare when a strategy succeeds in all its elements. No strategy is perfect, and human beings err and blunder, no matter how competent. Costs are frequently much more than anticipated. This is especially true in warfare, where every single life is precious. Union losses during the three-day Battle of Gettysburg in 1863 were over 3000 killed and 14,000 wounded. Yet these were not the heaviest casualties of the war calculated on a daily basis, or the heaviest losses in a single battle. Moreover, prior to the Battle of Gettysburg, the Union forces had been defeated in almost every major battle.

Losses, during the American Civil War were so high, and setbacks for the Federal government so numerous, that the former highest-ranking Union General, Major General George McClellan, ran against President Lincoln in 1864 presidential elections on a platform of a negotiated peace with the Confederacy and allowing it to exist as a separate nation.

Had Lincoln’s strategy of destroying the Confederacy been abandoned, there would be two countries occupying the area of the United States today, and in one of these countries, slavery might still be legal.

Occasionally, participants in executing a strategy get so caught up in winning that they use illegal or unethical methods. When these actions become public, the organization’s strategy may be abandoned even though the ill-advised actions taken may have little or nothing to do with the basic strategy or approach used.

Some years ago, fund trader Ivan Boesky was jailed for violating Security Exchange Commission rules on insider trading. Yet Boesky’s trading strategies, then abandoned, were successful without violating the law or rules of ethical behavior. However, the mere fact that they were associated with the discredited Boesky led others to assume that they were flawed and to drop them.

This happens a lot in business, where sales projections are almost routinely inflated. As a result, what is actually an excellent and profitable strategy is abandoned because the inflated, but anticipated sales results are not realized. The proof of this error is sometimes seen in advertising. An advertising campaign is supposed to yield certain predicted results. The results actually attained are still profitable, but no one notices because the predicted results were so much higher. So the company changes its advertising strategy. Guess what? Results are far worse, and other strategies never reach the same level as the profitable one that was discarded.

What the Strategist Should Do

What can the strategist do to help to decide whether it is the strategy that is wrong and should be abandoned, or one of these factors that is making it appear the strategy is not working? The answer is simple: a close look at the established objectives to see if they are being achieved.

When the BluBlocker Genius Got Blocked

Joe Sugarman, the direct marketing guru who sold millions of dollars of BluBlocker sunglasses through infomercials on television was one of the first entrepreneurs in the country to recognize the potential of the handheld calculator.

This was before the day of the infomercial, and Sugarman’s objective was to introduce and sell this product profitably through direct mail. He borrowed the money and launched his campaign. This began with different lists of prospects including engineers, accountants, teachers, corporate managers etc. He then wrote great copy explaining the product and its advantages, put together a complete direct mail package, offered a money back guarantee and did his mailing. Guess what? His campaign failed miserably and he lost a lot of money.

Others might have immediately abandoned direct mail as a strategy for selling this product. Not Sugarman. He re-examined his original objective of selling the product profitably. The question he asked himself was whether the strategy was useful in reaching his objective. Examination of the individual lists he had used revealed that while the response from most of the lists fell far short of even breaking even, others yielded a response rate that was enormously profitable. If he had only mailed to lists of this category of prospect, he would have made, rather than lost, money. He returned to his lenders, borrowed more money, mailed to these special lists and made millions.

Examining the War in Iraq with this Methodology

There is a lot of controversy regarding the U.S. war in Iraq. Some very respected individuals, including some generals and other expects say that the war was a mistake and that the U.S. strategy is failing miserably. Some politicians and activists even claim that the administration intentionally lied in order to take the country to war. They say the strategy is just plain wrong. The depth of this feeling is documented by the fact that those who agree that the U.S. should have gone to war in Iraq and those that disagree are almost evenly split at the time this is being written. Yet, when Iraqi forces were defeated and Saddam Hussein deposed more than a year ago, the large preponderance of Americans indicated that they were in favor of the war. Let’s look at this issue only in the light as to whether the administration’s strategy is succeeding or not. That is, there may be very good reasons for not having gone to war, and the administration may or may not have exaggerated intelligence reports to gain support. However, the only issue we’re going to examine is whether or not the strategy is working. Clearly if it is not working it should be abandoned.

Following the analysis recommended, we need to first look at objectives. These objectives are called war aims. In the case of the Iraq War, the U.S. had the following war aims, stated or implied:

Have these war aims been met? Certainly not all, and most aims have not been met completely, at least so far. Still, many would agree that these aims have at least been partially met. If so, why is this strategy being seriously questioned now? If we look back to the issues noted previously, the reasons become more obvious.

First, the U.S. Administration promoted highly unrealistic expectations including flag-waving Iraqis welcoming victorious American forces and an immediate and bloodless transition to a democracy. However, America is not popular in the Middle East. Remember, many citizens of Arab countries we considered our allies celebrated 9/11 even as their governments officially denounced this terrorist attack. Moreover, no Arab democracy exists, or has existed previously in the Middle East and the history of Iraq is violent, and not only during the Hussein regime. Faisal, king of Iraq until 1958, was assassinated in a brutal uprising and his mutilated body displayed prominently on the streets of Baghdad.

Because American casualties were so light in the first Gulf War, and non-existent in the war fought from the air in Serbia, Americans expected the same from the war in Iraq. Yet this has rarely been the case in any major conflict in which the United States has been involved.

Some commanders and U.S. officials made serious mistakes that exasperated the situation. The Iraqi army was abolished putting tens of thousands of armed soldiers and officers out of work. The American administration failed to appreciated that Maslow’s hierarchy of needs place basic needs such as food, water, electricity and security above possible democratic political aspirations. It’s been argued, creditably, that the occupying force was done on the cheap, with far too small a military force to protect citizens and prevent terrorism in such a large country. Many would argue, especially in hindsight, that additional delays would have been acceptable prior to going to war if the commitment of other countries to the war might have been gained.

Finally, the brutal and illegal actions of American soldiers guarding Iraqi prisoners at Abu Ghreib prison and their abandonment of basic American values and integrity did much damage. Although one might argue that the wrong people given power will abuse that power and have done so in all wars, it does not excuse what happened and it called into question American strategy and leadership.

Where does this leave us? By this analysis, the U.S. strategy is working and worked in achieving many of its war aims in Iraq. Again, this is not an attempt say whether the U.S. should have invaded Iraq or not, only whether or not the strategy has worked and is working to achieve the objectives set by the strategists who developed the strategy.

In the same manner, those of us who are struggling with a strategy in business need to look at that strategy as to whether or not it is achieving the objectives we have set. If not, it should be abandoned. If so, we should stay the course. 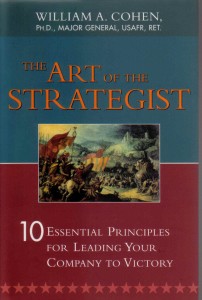 THE LESSON: We sometimes abandon successful strategies prematurely. Every strategy needs to be analyzed in the light as to whether or not it is achieving the objectives we have set.